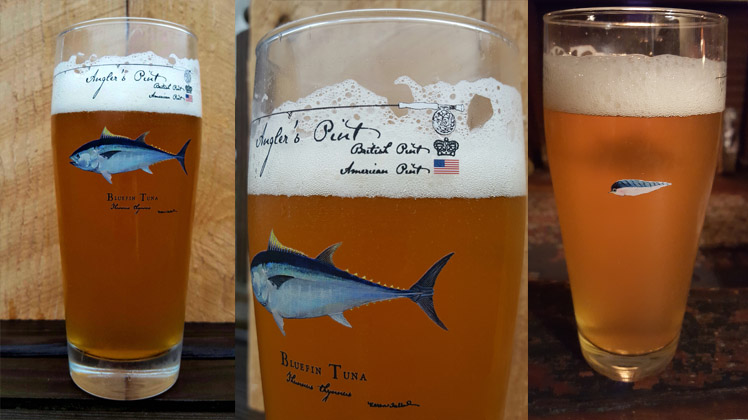 The Bluefin Tuna Angler’s Pint is the first glass in a new saltwater line of Angler’s Pints. These saltwater Angler’s Pints will differ from the trout Angler’s Pints insofar as they feature a saltwater rod and large arbor reel, as well as an appropriate fly pattern on the back of each glass (this glass has an EP (Enrico Puglisi) Mackerel).

I decided to go with a bluefin tuna on the first saltwater Angler’s Pint because, in part, I really like the original art. I started working on that painting in the winter of 2013 at a fishing show in New Jersey. I kept working on it when I had time between commission work. Here I am at the Maine Lobster Festival in the summer of 2013. 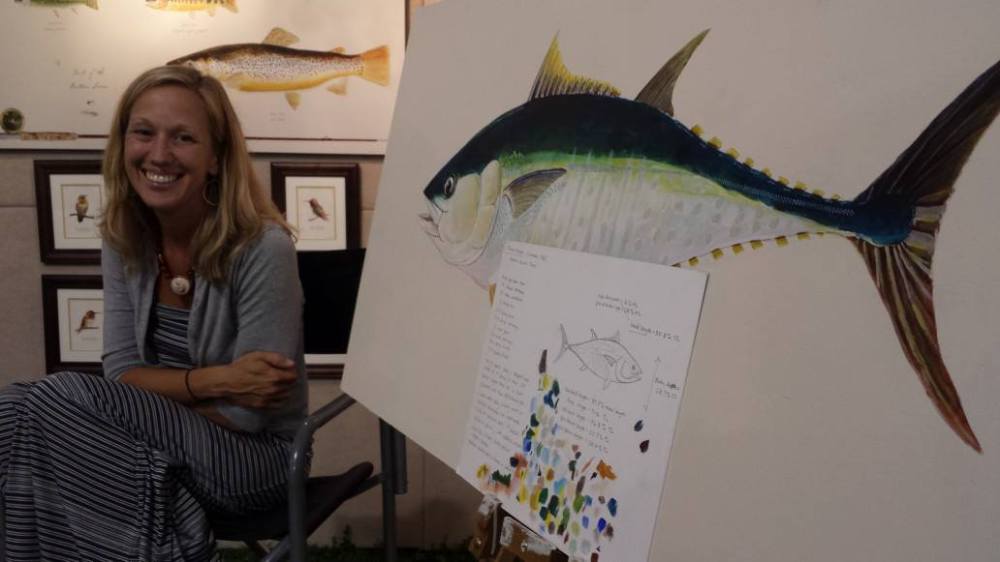 I love public painting, so working on a piece at a show is a fun way for me to engage with my audience, but when it gets down to detail work, I really need to be back in the studio where I have my microscope, reference materials, all my studies, specimens, and a quiet place to focus. 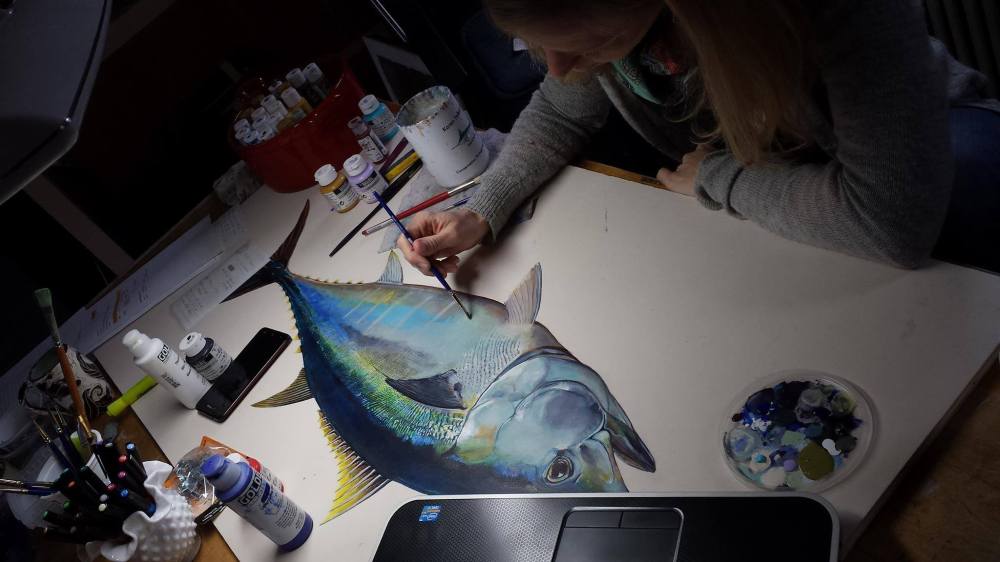 I worked on the bluefin throughout the winter of 2013-14. With a piece like this, I sometimes need to put it away for a couple weeks and then come back to it. As anyone who has commissioned a piece from me knows, I have a hard time calling a piece finished. In the late winter of 2014, about a year after I started, I felt like I was getting close, and then in April, I signed it and off it went for photography. The original came back to my Gallery, where it sold.

For these Big Fish pieces–they are roughly 2′ x 4′ acrylic on birch–I generally print a limited edition run of 30 prints at the same size as the original. Each is hand-signed and numbered, and some, like the artist’s proof shown below, are also remarqued (a small hand-painted detail) at the request of the client. This client in Florida requested a small mackerel remarque.

Although I love the piece, I hesitated to put a bluefin tuna on the first Angler’s Pint because of how controversial angling for bluefin tuna can be. I ultimately decided to go with the species, however, because…well…I love it, but also because it is an opportunity to spark an important discussion.

As you probably know, the tagline of my business is Conservation through Appreciation, and I knew there would be some who found it hypocritical for me to have a bluefin tuna on one of my Angler’s Pints. I get it. In fact, at one point, I had also sworn off bluefin tuna altogether given the dire conservation status of the species. After all, the IUCN Red List lists the species as “Endangered.”

The thing is, however, that seafood and conservation are rarely that simple. The summer of 2017, when I released the Bluefin Tuna Angler’s Pint, is a case in point.

I live on the coast of Maine, and in the summer of 2017, we actually had a near-glut of bluefin in the Gulf of Maine. What was that about? For one, there were plenty of forage fishes about, but the increased numbers are also, according to both scientists and fisheries managers, a result of stock rebuilding efforts and effective management.

Where do we go from here? There are  no doubt some big and important questions. Should the quota be increased, and if so, by how much? Are warming waters playing a role in the fish’s behavior? What effects will continued increases in forage fish populations have on bluefin tuna, especially with so many dams coming down in Maine? At the end of the day, these questions are why the Angler’s Pint exists–a big glass for big discussions about the species we love.