I’m pleased to announce my newest set of Angler’s Pints–the Florida inshore fishes series. There are currently three designs: the Tarpon Angler’s Pint, the Bonefish Angler’s Pint and the Red Drum (Redfish) Angler’s Pint. Soon there will be a fourth, so stay tuned for that announcement, but first let me take you on a tour of the new designs I was fortunate enough to debut on the island of Boca Grande (with some help from the fine folks at Fat Point Brewing, Cigar City Brewing and 3 Daughters Brewing).

Like the other saltwater Angler’s Pints, these new glasses all have an appropriate fly on the reverse side, as well as a longer rod that wraps around the glass and which sports a large arbor reel (see above). 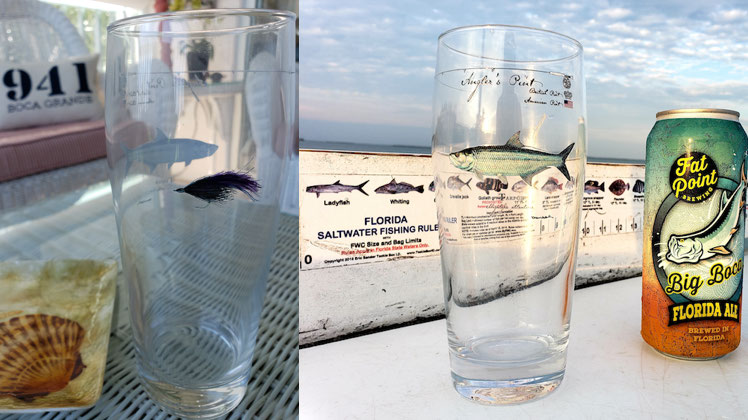 The first in the series is the Tarpon Angler’s Pint with a version of Malzone’s Purple Demon fly on the back. Known as silver kings, tarpon are incredibly powerful and almost prehistoric looking animals. Sight fishing for tarpon is considered one of the ultimate fly fishing experiences, and in more recent years, anglers have played an important role in both better understanding and conserving the species. I completed the original artwork used on this glass in the fall of 2018. The original painting is 30″x14″ and is acrylic on board (and it’s for sale!).

I decided to paint Captain Dan Malzone’s fly for the back of this glass because, in part, he’s a legend on the West Coast of Florida, where I’ve spent time fishing for tarpon on the island of Boca Grande. In fact, a Tarpon Angler’s Pint with Boca Grande on the back is the first glass in the new Angler’s Pint Islands Series–more on that in a later blog post. 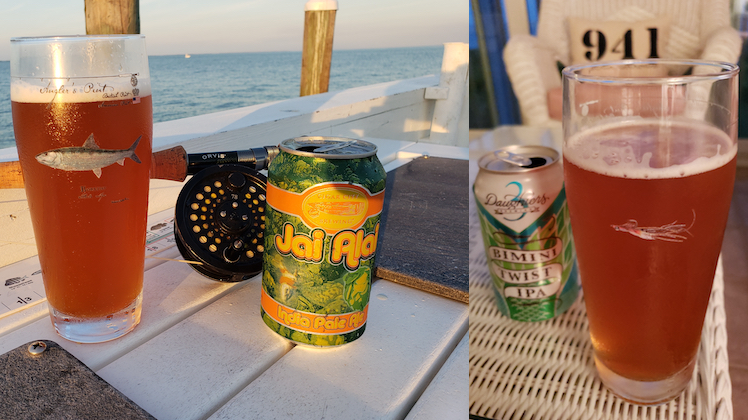 The second Angler’s Pint in this series is the Bonefish Angler’s Pint with a Peterson Spawning Shrimp fly on the back. Sometimes called grey ghosts, bonefish in the US are most commonly found in the Florida Keys and Biscayne Bay. In 2013, the State of Florida approved a measure to make bonefish a catch-and-release only fishery. You can learn more about bonefish conservation, as well as the conservation status of other fishes featured on Angler’s Pints, here.

The original bonefish painting used on this glass was also completed in 2018 and is 30″x14″. Like the tarpon painting, it is acrylic on board (and it’s also for sale!).

The third Angler’s Pint in my Florida Inshore Series is a Red Drum Angler’s Pint. The red drum is frequently called a redfish, and, of the three species I’m discussing today, this is the one with which I have the most personal experience as an angler. Even as I write this, I can feel the excitement and awe of seeing one or more of these gorgeous fish tailing on the flats of Charlotte Harbor.

Unlike the tarpon and the bonefish, the original red drum paining is mixed media, including colored pencil and watercolor. For the fly on the back of the Red Drum Angler’s Pint, I chose a Crafty Shrimp. Why? There is hands down no better all around fly for redfish in my opinion!

While the original red drum paining is sold, I do have limited edition giclee prints available.

In addition to purchasing the new Angler’s Pints individually, you can buy them as a set in a Presentation Box such as the one pictured below. 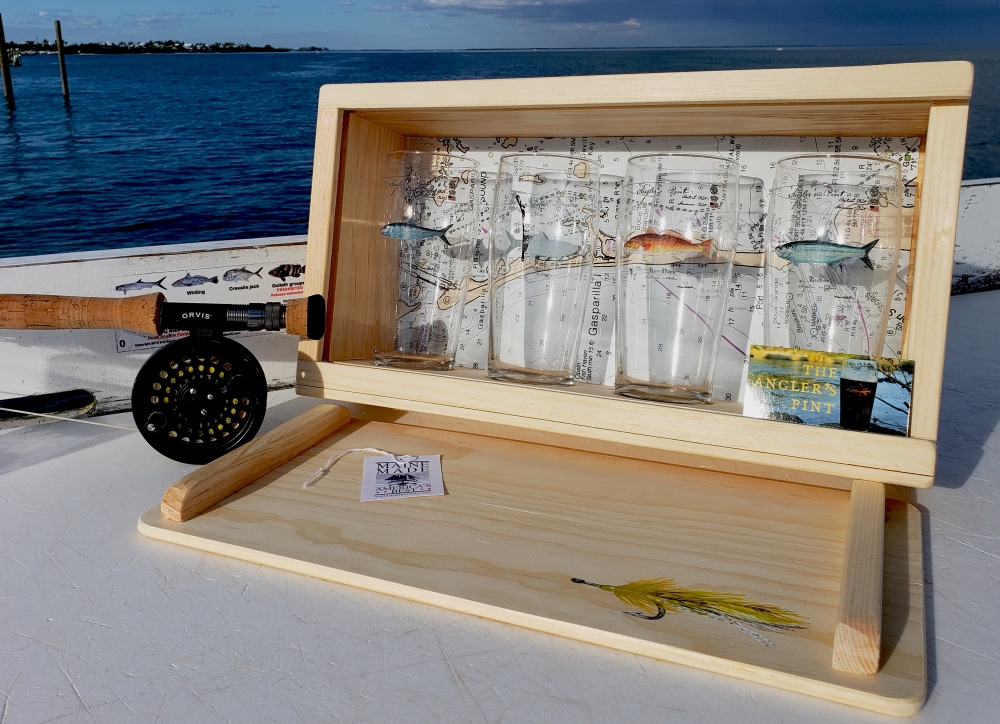 The Presentation Box includes four Angler’s Pints and can be customized with your choice of NOAA chart and handpainted fly on the lid. Until the fourth glass in this series is released, you can double up on the glass of your choice (or add one of the other saltwater Angler’s Pints).